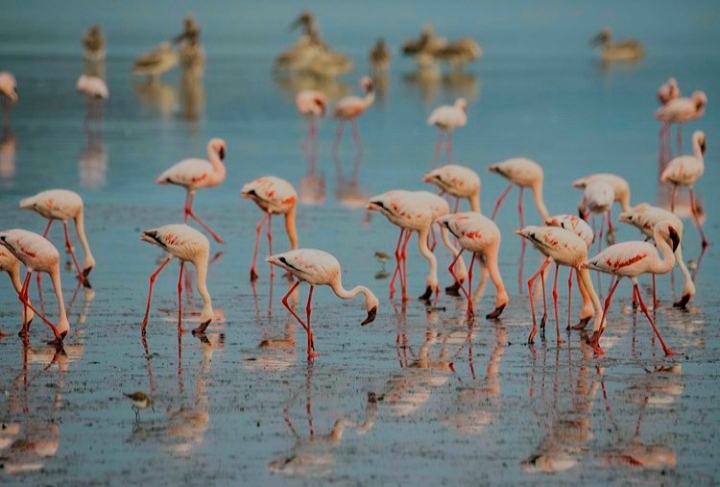 ‘Home to millions of flamingos'

Lake Natron Game Controlled Area covering an area of 3,000 square kilometers was designated by government notice of 1974. The GCA includes a wetland of international importance with 224,781ha (2248km2) squeezed between Monduli and Longido districts to the east and Ngorongoro to the west at (2° 30’ S, 36 °E).

It has the Lake with a maximum of 57 kilometers long and 22 kilometers wide equivalent to an area of 1254km2. The surrounding area receives irregular seasonal rainfall, mainly between December and May totaling 800 millimeters per year. Temperatures at the lake are frequently above 40 °C (104 °F). The alkalinity of the lake can reach a pH between 9.5-12.

Lake Natron  was also designated as a Ramsar Site, Wetland of International Importance on 4th July, 2001. It also lies low in the Great Rift Valley surrounded by a landscape blotched with thorn trees and bush, Nearby is the Africa’s highest active volcano- Oldonyo Lengai known to the Maasai as “The Mountain of God”.

The lake is principally fed by the southern Ewaso Ng’iro River which arises in central Kenya, Engaresero river in the southwest, passing near Engaresero village, Pinyinyi river which drains the north-west area in Loliondo district in Tanzania and by mineral-rich hot and cold springs .It is quite shallow, less than three meters deep and varies in its width depending on its water level. Lake Natron is the world’s most important breeding site for Lesser Flamingos, a species which is classified as “Near Threatened” in IUCN’s red list.

The table below shows tourism attractions and activities conducted

Lake Natron GCA in the northern Tanzania is the most important breeding site for lesser flamingos in the world. Eastern Africa has between 1.5-2.5 million of lesser flamingos-representing 75 per cent of the global population and most of them are hatched at Lake Natron. Breeding periods are erratic, depending on the timing of seasonal rains, but most breeding in January and October in Tanzania however, breeding occur all year round in Lake Natron, if conditions are right.

The lake has beautiful and interesting bird species with Lesser Flamingos having a dominating population of about 1.5-2.5 million forming 75% of its population worldwide.

Three species of alkaline fish are found at Lake Natron, two endemic fish species, the alkaline tilapia, Alcolapia latilabris and Alcolapia ndalalani thrive in the waters at the edges of hot springs inlets. Alcolapia alcalica is also present in the lake, but not endemic.

The lake Natron GCA is devoid of macrophytic vegetation, but is very productive in terms of algae, with blue-green algae (cyanophyta) such as spirulina spp. dominating the saline waters. Lesser flamingos feed on by filtering blue-green algae from the salty waters.

Waterfalls of about 10m long and 5m long found in the escarpments of the Lepalakash in Engaresero village. This area provides recreational activities such as swimming and nature appreciation.

This is the only active mountain in Tanzania that erupt natrocarbonatite lava which is cooler than other lavas about (510 degrees C) compared to the temperatures of basaltic lavas (1,100 degrees C) with less silicon. It lastly erupted in 2006. It is 2962m long above the sea level. It is considered a mountain of god by the Maasai tribe as it is used in sacred offerings. While on the summit of Mountain Ol’doinyo Lengai one can see magnificent scenery of the Soda Lake Natron which accommodates and consist of good nesting sites for different bird species especially the Flamingos, pelicans and geese.

Is a volcanic mountain of about 2942m tall located on south-eastern edge of Lake Natron in the East African Rift valley. On the lower part of Gelai mountain is the forest area where various wildlife such as Buffalo, Eland, Bush buck, Water buck, Leopard and different bird species are found. It contains various springs that feed the Lake. The visitor can experience a cool climate on top of Gelai Mountain throughout the day and during the night the condition becomes cooler causing formation of dews and fog.

t is believed through research findings; Homo sapiens in 20,000 years ago passed near the Lake Natron on the southern part of it and left marked foot prints on the mud surface. In a matter of time, the mud’s surface dried out, preserving the prints in a cracked crust.

Hot and cold springs are found around the margin of the Lake Natron feeding it. Hot springs are rich in minerals such Cl, Na, F, Ca etc. which make them suitable for healing some diseases especially dermatitis. At the edge of the inlets of hot springs there are alkaline tilapia (Alcolapia ndalalani and Alcolapia latilabris) thriving.

Lake Natron GCA constitutes hot climate in low altitude and a cooler climate in higher altitude areas. On average, the temperature ranges between 20°C and 35°C while the rainfall ranges from less than 500mm in low lands to 900mm at higher elevations. High evaporation in the Lake Natron makes it one of the hottest and the driest place in the Northern Tanzania. In January and February temperatures can reach above 40 0C.

The GCA can be easily accessible by main road from Arusha city through Manyara or Mto wa Mbu then the road to Engaruka .